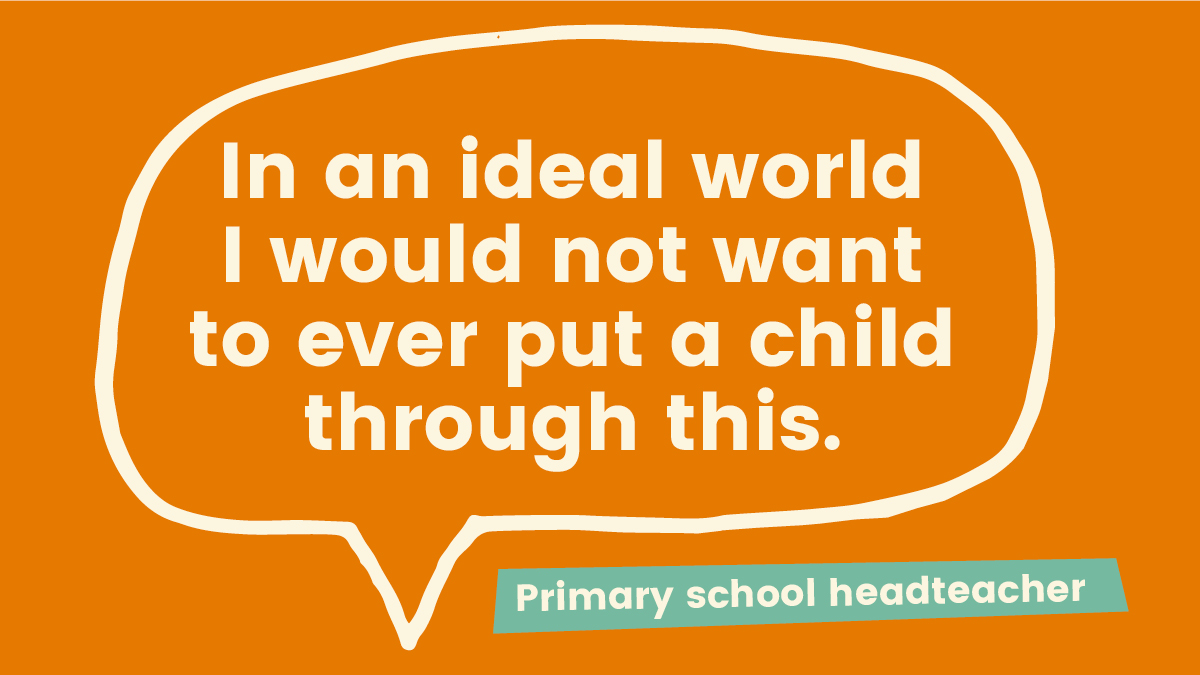 “In an ideal world I would not want to ever put a child through this.”

A ‘strait-jacketed’ curriculum across the primary years; high stakes affecting both staff and pupils, and the need for specialist teachers who can cope with the pressures of year 6: these are just some of the far-

The full report can be found here

The high-stakes nature of SATs — whereby a school is judged on the basis of tests taken by 10- and 11-year-olds — is at the heart of much of the criticism. Dr Bradbury concludes, “For many headteachers, SATs are an indication of a system which has the wrong priorities, with negative effects on children, teachers and the curriculum and pedagogy”.

Negative effects on the whole school – not just year 6

Preparation for SATs, and the tests themselves, have negative effects across all year groups, not just year 6, according to heads. The curriculum is narrowed not only in year 6 (an overwhelming 90% agree) but also in other year groups (over half — 52% — agree). One head commented that “preparation starts as soon as the three- year-olds step through the door” while another said the curriculum is “strait-jacketed by the need to prepare the children for the tests”.

We’re really aware now that the work starts right from the moment they enter the school in Nursery.

The curriculum is ALWAYS directed towards SATs as the tests are so influential to Ofsted (& so then reputation, league tables etc.)

By the time pupils reach year 6, the effect on the curriculum is pronounced. Almost three-quarters of heads (74%) admitted to ‘teaching to the test’ with one head commenting:

For those children in year 6 […] it’s intense, it’s grotty. It’s just reading, writing, maths, pretty much and I wouldn’t choose that for any child, particularly if they’re not very good at reading and writing and maths. It’s fairly horrendous for them to have to do that all day, every day […] In an ideal world I would not want to ever put a child through this.

Another effect in schools is the controversial practice of setting, the value of which has been called into question by recent research. Over a third of heads (35%) accepted that SATs meant grouping by ability was necessary in English, while almost half (47%) said the same for maths.

…on a sort of moral level, I’m opposed to setting, although that’s exactly what I have in Year 6, but not just two or three sets, on a daily basis there might be six sets. I’m not a fan of it, but it [SATs] definitely encourages setting and I know that lots and lots of schools set from Year 3, 4 onwards.

The cumulative effect of this focus on one week of tests is clear: over 83% of heads agree that SATs have a negative effect on pupils’ well-being.  As one head commented:

It’s a negative impact. They are stressed and worry. They are exhausted by the Friday of SATs week. They aren’t in a good place. […] They think they are a failure if they don’t pass no matter what we say to them.

The report also acknowledges the varying levels of preparation undertaken by schools. Test preparation varies widely and is based on a variety of factors including a school’s current Ofsted rating; the socio-

demographics of their location or parents’ expectations. In many heads’ views, this leads to a ‘gaming’ of the system and raises questions about the reliability of the test data.

Schools who don’t cheat or drill EVERY WEEK or run after-school SATs clubs, or SATs holiday clubs, have lower scores.

The actual measuring system itself is […] certainly unjust. It’s comparing who games best not who teaches best.

Effects on staff: the rise of the year 6 teacher

Nearly all heads questioned (99%) agree that SATs put pressure on teachers. The consequences of this

include the rise of the specialist Year 6 teacher, a role which demands specific skills and experience. This can create a hierarchy of teachers, with Year 6 being the highest status but also the most pressured year group.

Many heads also commented on a biased allocation of resources towards Year 6. As one said, when it comes to Year 6, ‘basically I just throw all the staff there’.

When we look at staffing, the starting point is Year 6 and you want strong teachers in there. So, the demands of the curriculum now means you’ve got to have really strong and intelligent, able teachers in that year group.

Oh, without a doubt, the strongest teachers have to go into Year 6 […] because it’s such a high stakes accountability measure. Everything depends on it because if we get bad SATs results, then that triggers an Ofsted.

When children are not grouped into sets, teaching resources can be stretched in other ways:

We put the children into small groups which means taking support staff and leadership away from other parts of the school.

An overwhelming majority of heads are critical of the changes made to the content of Key Stage 2 SATs in 2016: 91% believe that they have not improved the assessment.

Comments on the changes included:

Despite format changes, they have not added to our knowledge of what the pupils can and cannot do and whether they are prepared for coping in Year 7 and beyond.

The standards expected have put more children in danger of failure

There were also specific comments about the content of the Grammar, Punctuation and Spelling test (or GPS or SPaG) and the removal of the ‘calculator paper’ from the maths test, which was seen by many as ‘a backward step’.

The GPS test has become the new science test and you can hothouse to get irrelevant results.

[On SPaG] It’s not teaching the children to be a writer; it’s not teaching them the vocabulary and the flair for language […] they’re asking them about words that they would never, ever use in their writing because they’re eleven.

Heads also object to the way children are now told they have ‘not reached expectations’ when they are given their results:

I think to brand children as failures, in Year 6 […] goes against everything that we come into teaching for, really.

It is emotional when you have to give the children their results […] you are handing over complete disappointment to some children and families.

Sara Tomlinson, a spokesperson for campaign group, More Than A Score, comments, “The stakes around primary assessment are so high that the negative effects are inevitable. It’s wrong to test 10- and 11-year-olds under exam conditions and it’s unjust to use those results to measure a school’s performance as a whole. It’s time for the government to listen to those who know children and schools best and put an end to this broken system.”

* Data collection took place in the period March – June 2019 and used a mixed methods approach involving a survey and interviews with 20 headteachers in England.

The survey was compiled and distributed using Opinio software. The link to the online survey was distributed via the NEU and social media, with a specific request for headteachers to respond. It was completed by 297 people, and results here include responses from the 288 respondents who were or executive headteachers only.

Interviews were conducted with 20 headteachers at primary schools in various regions of England. The headteachers included those from different types of schools and those with Outstanding, Good and Requires Improvement Ofsted ratings.